Postmortem for time chunch take one.

This is an old one - this game is fuckin, archaic. Apocryphal Slime game.

If you want, take a look at the final build of time chunch take one. It's on the morgue page.

I started this game in 2017 when I realized the game I was working with - untitled, just called (game) - was going fucking nowhere, and working on it was miserable. I had been working on (game) in a little-known engine named Superpowers, and that engine? Quite frankly it's not good. It's just abysmal. I wasn't in a great place while making (game), what with it being around the time that fascism finally grabbed power in America, and the relationship I was in at the time shit the bed, and the game's intent was to just shove something out and consider myself a game dev, maybe sell it to a flash portal, if those still existed. The last thing especially conflicted - I was desperate for money but not so much that I would sacrifice my pride for it.

The game wasn't good, and I gave up.

But Superpowers had another thing built into it - a structure for making games in an engine called LOVE2D. I didn't keep using Superpowers if I could help it, but I've been using LOVE2D to this very day because of it. The first game I started making in LOVE2D was this.

I'm gonna do a standard postmortem thing here and list some good things, and some bad things. 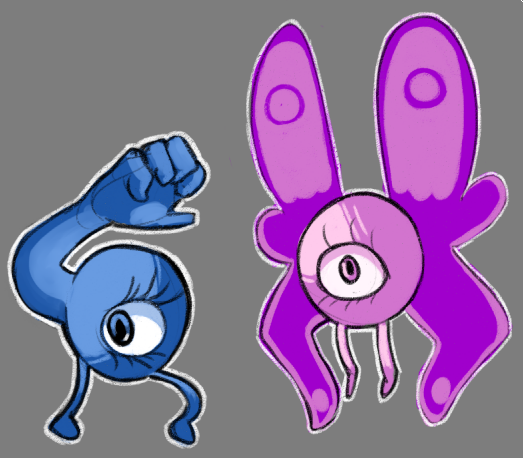 adventure lass! was the first character designed for time chunch. Since the player character was going to be represented with an @ symbol, I thought she should look something like that - and thus adventure lass!, an eyeball with an arm jutting out of her, was designed. I think it was Austin that originally designed her - the pins on our Discord have this image as the oldest image of her.

lass!es are a recurring thing in games I work on, sort of miasmatic manifestations of concepts, like "adventure", "time", "magic", "fate", et cetera. They're always stubby little bitches with weird emotional tapestries. adventure lass! in specific owes a lot to Eyes from Nuclear Throne, one of my favorite character designs ever, and time lass!, her NPC counterpart, owes to Aradia Megido from Homestuck, one of my favorite characters ever. 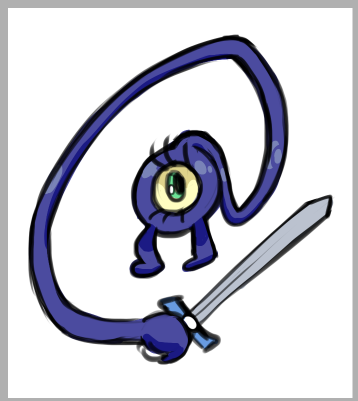 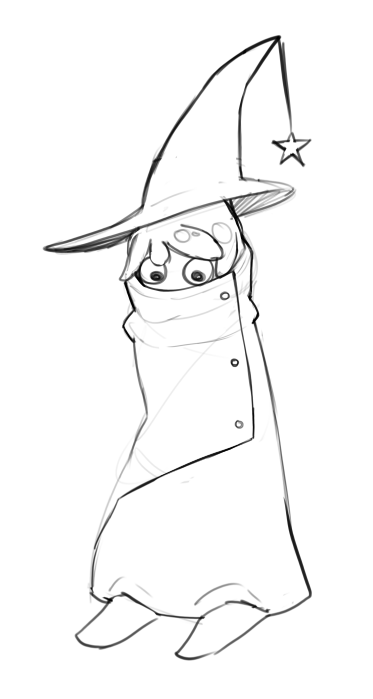 Along with this, there was also the first design of "the wizard", a recurring character. The first design, that one up there, isn't very good. In time chunch, "the wizard" is a collection of wizards, more a species than an individual character - they're derived from the World of Dungeons wizard, in that their powers are derived from summoned spirits, rather than innate knowledge. 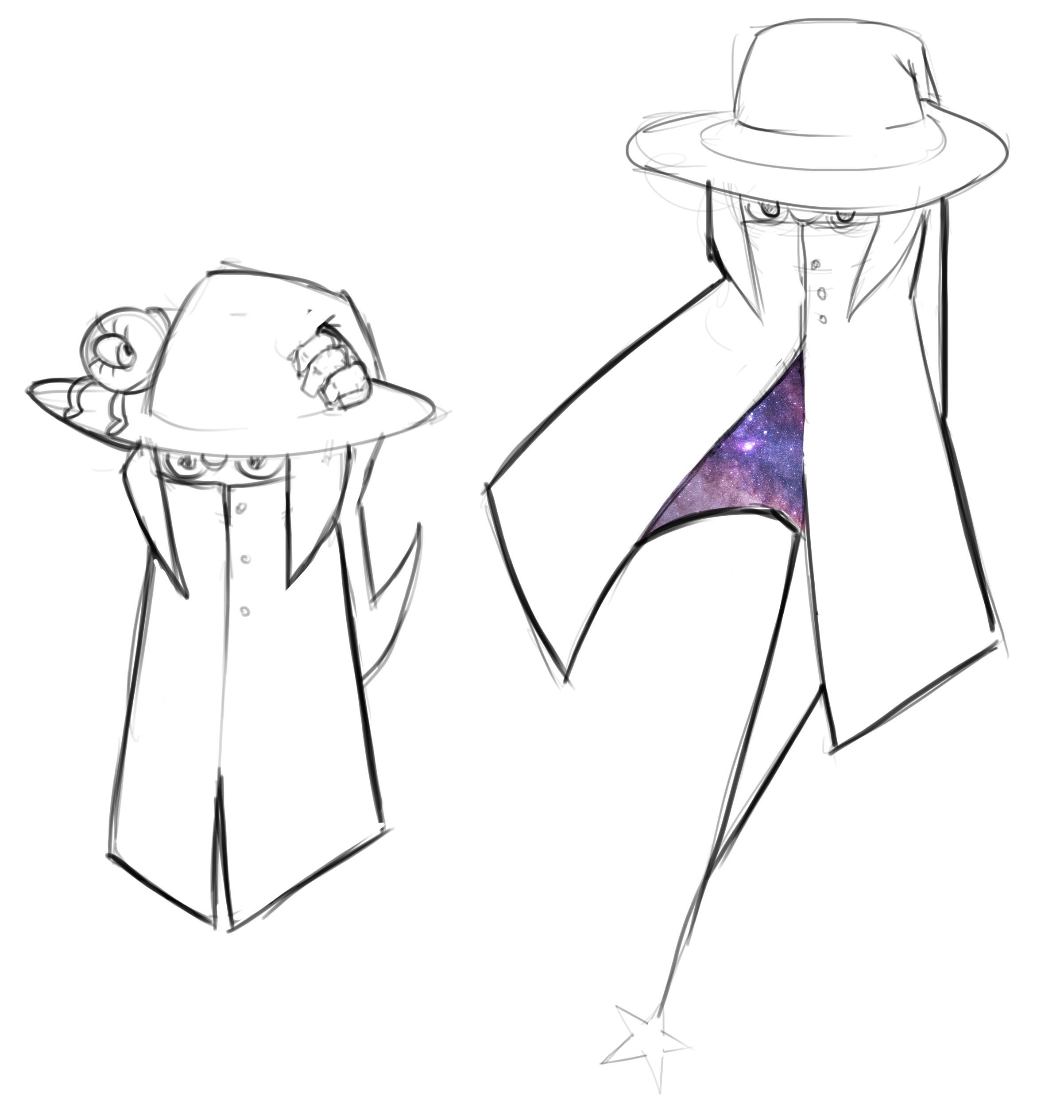 Later in tiny dungeon, "the wizard" is a boss - an obstacle towards orb friend. There's tiny dungeon lore but not much and it's not really worth explaining, IMO. At least not yet........ (I laugh secretively.)

Finally in box game, "the wizard" is The Wizard. The Wizard is Lemming, the player character's adoptive father figure, and tutor, and has taken on more of a characterful spirit, being a dad who can't quite connect with the Gen Z kids. I really like the wizard design.

Thing that went wrong: The expectations created by the title

It's called Time Chunch. It's like, a decent name, it stuck with me, but it created an expectation of time mechanics in the game, which my baby brain had no idea how to make work - I still don't quite know how I'd make it work now. This is kind of a minor thing but not being able to deliver on time-oriented mechanics still really kinda bummed me out.

I had the idea for these mechanics after waking up in the middle of the night and scribbled them down - a roguelike in which the hunger bar and health bar are one and the same, a hybrid resource plainly called "time". It went something like Transistor. When you die in Transistor, you lose an ability. Once you're out of abilities, game over. I translated this into "all items are food, all items can be crushed into time." - if you're dying, you can trade that scroll of fireball for another 50 turns.

This was almost a good idea, but this came with another problem - if health and hunger were the same, it made strong enemies difficult to balance, since "you are constantly ticking away health" combined with "strong enemies can take large chunks" created a not-quite-fun scenario. I balanced this out by restoring health every time the player moved on to a new floor, but it still had this issue of enemies being bothersome rather than challenging, which wasn't quite what I liked - a well-balanced fight, in my opinion, is long, but not tedious.

I'm still not sure how I'd balance that, if at all, though in knowing I feel like I gained something - the ability to predict how mechanics would play out in a space. I got way better at visualizing how interactions worked and such, which is an invaluable skill.

Once I had mechanics in place, the next problem arise, the problem then was that I had no story - my plan was to implement mechanics, and then read those mechanics nonliterally to produce a story. This didn't work. After that, I took inspiration from the only thing I'm ever capable of taking inspiration from, Homestuck. A standard run of the game had 12 floors, which meant 12 unique locations, and thankfully, there's also 12 zodiac signs - this wasn't initially gonna be a Homestuck thing but then Austin thought it was gonna be a Homestuck thing. Eventually I decided that these 12 locations were gonna be more nonliteral expansions of characters who lived in this dungeon, so I designed 12 characters. These characters were more or less identical, barring designs - all of them in some way were derived from Alphys from Undertale. Sad, science-aligned girls who believed that it was their fault that they were stuck within this dungeon, each one with their own problems, though the dungeon ecosystem they shared would fall apart without them there.

They all felt kinda bland, is the thing. I latched on to three of them once I realized I wanted to express the things I felt at the time through this game. Erin was an artist, whose mind brought her power - the ability to see into worlds beyond her own, to see the shape of the world as it was. May was a chronicler, more or less identical to Lucretia from the Adventure Zone, as she existed during the Stolen Century arc, and Grace, the one who was science-aligned the hardest, was a character I reused from a tabletop campaign concept I had. It was Grace who stuck with me the most, for obvious reasons - she was neurotic and more than a little on edge at all times. When you are introduced to her, she's literally dangling herself over the edge of a pit, kicking her shoes off and them not coming back. It's her venting to adventure lass! that sort of shifted the momentum of runs into the good ending, if you do.

However, as the year went on, I recovered. I got better, supported by friends and I stopped being able to tap into that well of dread and loneliness, and losing touch with that made the characters harder to write. C'est la vie.

Very strange thing to say after that bit, but honestly, picking it up to put out a new build, the sort of hazy tone that it had acquired was really intriguing to me. Worms, mushrooms, wizards, inside a church that resembled an abandoned Walmart church in my mind. The original cast of time chunch - adventure lass!, Pip the salesman, the Rancho King (stolen from a MBMBaM bit) and the door lover, as seen below - had a cohesiveness to it that really resembled something that could be charming in a very new way. 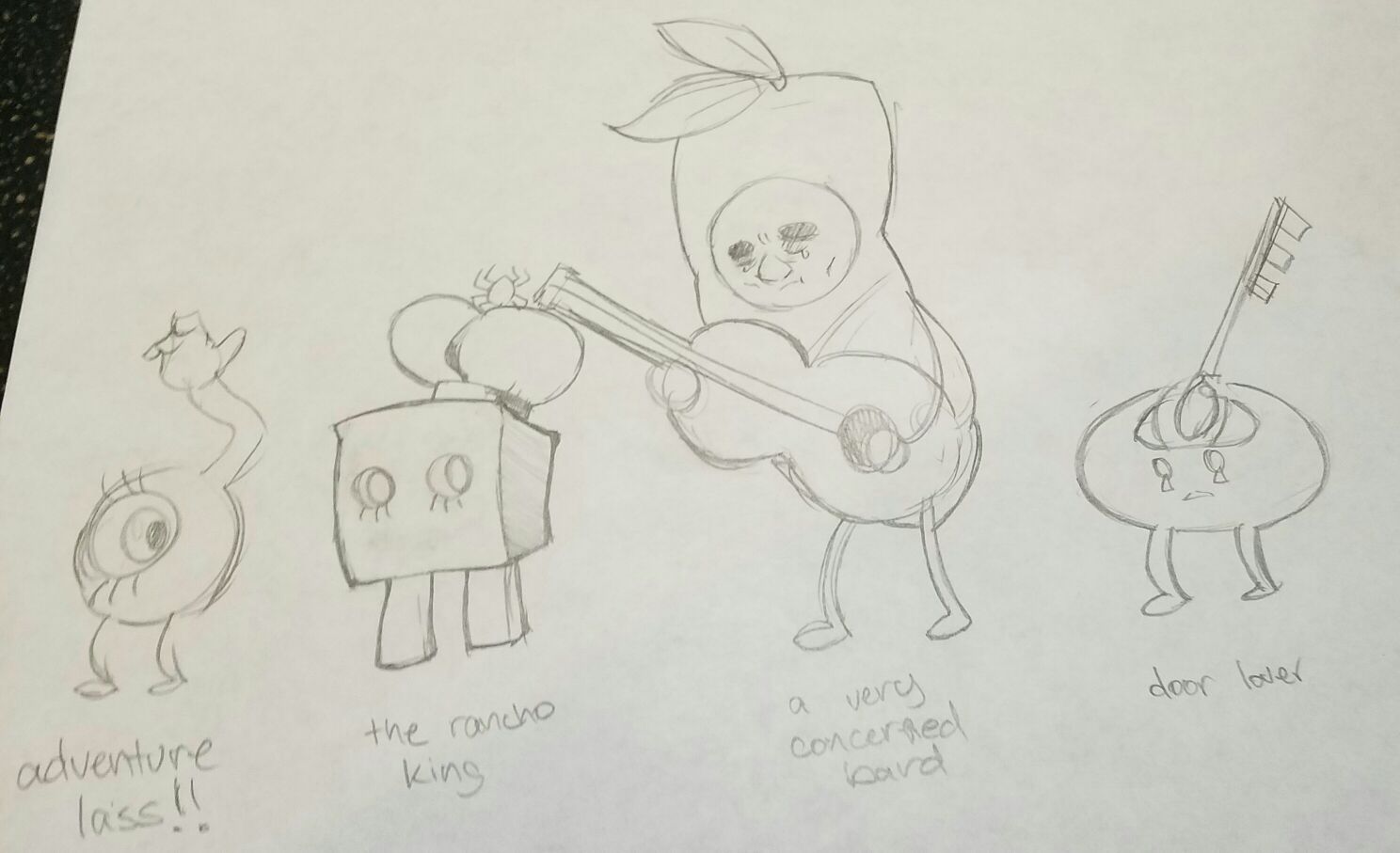 Losing this was sort of the first domino into this game going way off the rails and while I doubt this game would have been out in time for Rancho King and the clown box to be timely and topical references, it was a first step into a tone that I still kind of want to capture now, something that's grounded, yet still fairly, whimsical I guess is the word.

I still want to make Time Chunch, because the emotional beats still sort of resonate with me, but in the meantime, it's taken on some secretive meanings that would be difficult to express without more context. So here you can look at the TIME CHUNCH BETA - look upon my works, and despair, for there were no frames to see. Because it runs like shit. Just abysmal.

But there's gold in them hills.